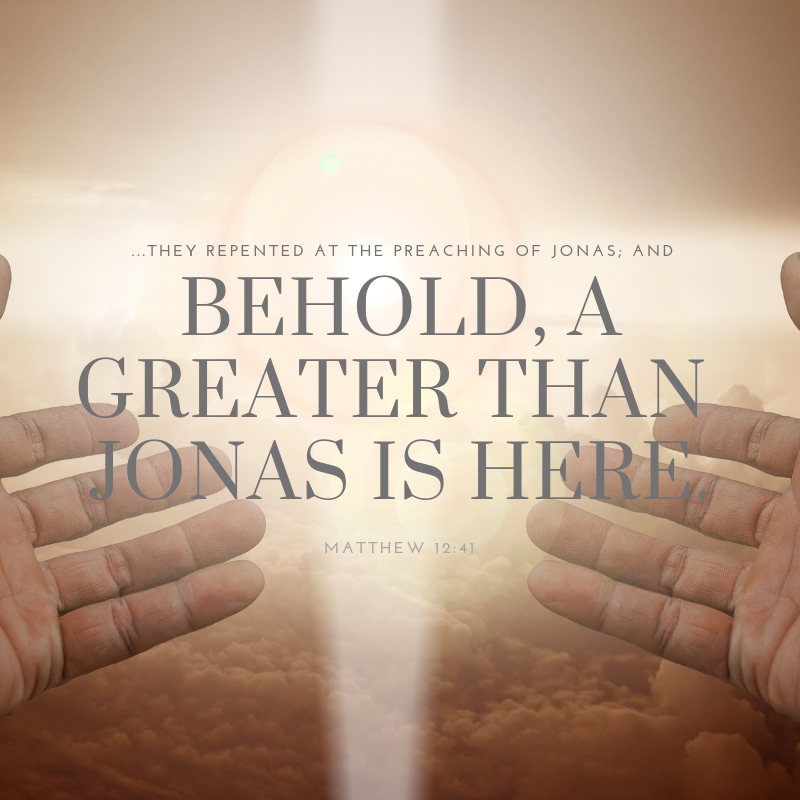 Last time we mentioned we would bring one last post on God’s mercy in Jonah. Allow me to jump ahead to this theme of Jonah, in hopes of returning the final installment on mercy next time.

“Then certain of the scribes and of the Pharisees answered, saying, Master, we would see a sign from thee. But he answered and said unto them, An evil and adulterous generation seeketh after a sign; and there shall no sign be given to it, but the sign of the prophet Jonas: For as Jonas was three days and three nights in the whale’s belly; so shall the Son of man be three days and three nights in the heart of the earth. The men of Nineveh shall rise in judgment with this generation, and shall condemn it: because they repented at the preaching of Jonas; and, behold, a greater than Jonas is here.” Matthew 12:38-41

All Scripture is related in some way to Jesus Christ. The Old Testament Scriptures prepared the way for Christ in various forms. One form was that certain persons and events would in some way prefigure the person of Christ. Events in the book of Jonah are included. Jesus Himself specifically communicates this as recorded in Matthew 12. Christ’s opposers, not in sincerity, asked Him for a sign. As if Jesus had not already done enough to demonstrate that He was more than just a mere man, they indicated a desire for something more. Jesus, knowing their rebellious hearts, would not indulge them with some powerful act in that moment. Rather, He pointed them to the ultimate events of His mission on earth: His death and resurrection. And, He referenced these events under the heading of “the sign of Jonah.” Surely, those on the scene could not have discerned the full meaning of Jesus’ words. But, looking back, we can see the richness of this sign that Jesus spoke of.

Just as Jonah was confined to the belly of the great fish and then brought forth from that fish, so Jesus would be confined to a grave for a time, only to then be raised from the dead. In reading Jonah, then, we are meant not only to think upon what happened to this Hebrew prophet, but also to meditate on the death and resurrection of the Lord Jesus Christ. We are meant to think upon the One who is “greater than Jonah.” Jonah went down into the sea and gave the appearance of being dead and buried. Likewise, he experienced the resemblance of a resurrection. Out of the darkness of the fish’s belly in the waters, Jonah was brought back to seeing the sunshine and walking on the earth. The Greater Jonah really did die. And, His resurrection was more than just a figure; He actually came back to life!

This is the good news in a nutshell: that Jesus Christ died for sinners and rose again from the dead (1 Cor. 15:1-4). Jesus Christ is the Savior; He really saved sinners by His life and death. Furthermore, His resurrection from the dead is essential. His resurrection reveals His complete and utter conquest over sin, death and the grave. It presents Christ as the great Champion and Conqueror. All those who are in Christ, because of Christ, are more than conquerors as well (Rom. 8:37).

As we look into some of the details of this book, I believe we are made to think even deeper on the person and work of Jesus. As we have noted, due to Jonah’s sin, a storm came and eventually he was thrown into the sea, presumably to his death. Jonah was in anguish. I wrote the following about Jonah in a previous blog:

Chapter 2 records a prayer of Jonah crying out to God for deliverance. Jonah felt to be not only in the depths of the sea, but also far away from God. He felt to be in the darkness of Sheol, the place of the departed, a place of gloom (2:2). He was being overwhelmed by the literal waves of the sea threatening to terminate his life (2:3). He felt to be cast out of God’s sight (2:4). He felt closed in and surrounded and it seemed like it would go on forever (2:5,6).

Jonah’s anguish gives a precursor to the anguish of Jesus. Jonah felt to be in darkness, gloom, and full of heaviness. The Greater Jonah in the Garden of Gethsemane said, “My soul is exceeding sorrowful, even unto death…” (Matt. 26:38) This verse could be stated in words like these, “I am intensely sad. I am sorrowful all over, all around, through and through.” Jonah, humanly speaking, was about to die. The Greater Jonah really did die. Jonah felt to be cast out of God’s sight. The Greater Jonah on the Cross said, “My God, my God, why hast thou forsaken me?” (Matt. 27:46). Jonah felt to be cut off by God. The Greater Jonah really was cut off by God. Jonah deserved his anguish. His disobedience to God, his own sin had led to these events. In contrast, Jesus Christ had no sin or disobedience. But, His obedience to the will of His Father led Him to take upon Himself the penalty and punishment for the sins of others. His obedience to the Father in being cut off by God on the Cross ensured that His people would never be cut off by the Father.

This is not just theory. Jesus really suffered these things. In His great love and grace, He made Himself the Substitute who suffered in the place of people like disobedient Jonah and the cruel Ninevites. He gave Himself for people like you and like me. We can never fully grasp the depths of what happened that day. For all eternity past, the Father and Son looked upon one another with holy delight and pleasure. Now, the Son takes on His holy person the sins of others (2 Cor. 5:21) and the Father plunges the sword of justice into His side (Zechariah 13:7). This Cross of Christ is the salvation of all who by free grace are brought to trust in Him. The Cross is the way that God determined to bring redemption to His elect people. There is no other way. Through the Cross there is forgiveness of sins, freedom from guilt, and reconciliation with God. Through the Cross, there is free access to God, power to live a godly life and a guaranteed title to an eternal inheritance. No wonder the Apostle Paul said, “For I determined not to know any thing among you, save Jesus Christ, and him crucified.” (1 Cor. 2:2).

But, Jonah did not stay forever in the fish’s belly. And Jesus did not suffer forever. Nor did He remain forever in the tomb. No, He rose again! He is alive forevermore. God the Father had promised His Son that He would not see corruption. The Father would not dare dishonor the Son’s obedience by leaving Him in the grave (Psalm 16:8-11). No, the Father raised Jesus from the dead and gave Him glory (1 Peter 1:21). Christ has been highly exalted because of His perfect work. That is exactly as it should be.

Sin brought Jonah (and us) low. Jesus Christ was brought low, so that unworthy sinners would be raised up. Can you see how your sin has brought you low? Have you tasted the bitterness that sin has deceived you and defiled you? Look to the only One who can cleanse sinners and raise them up. Look to Jesus Christ.

What is the sign of Jonah? In short, it is the resurrection of Jesus Christ. It shouts out that He lived, died, was buried and rose again for the salvation of His people. Yes, Jesus is Greater than Jonah. And that is Good News!

Elder Timothy Guess was ordained to the gospel ministry under the authority of Grace Chapel Primitive Baptist Church in Memphis, TN, in 2006. He has served alongside Elder Poe at Collierville Church since shortly before his ordination. Bro. Timothy has been blessed to assist in gospel labors in Nicaragua, India, and Cambodia. At the home front, he is in involved in gospel outreaches among Spanish-speakers. He and his faithful wife Meredith have five children. Bro. Timothy preaches in our Sunday morning worship services.