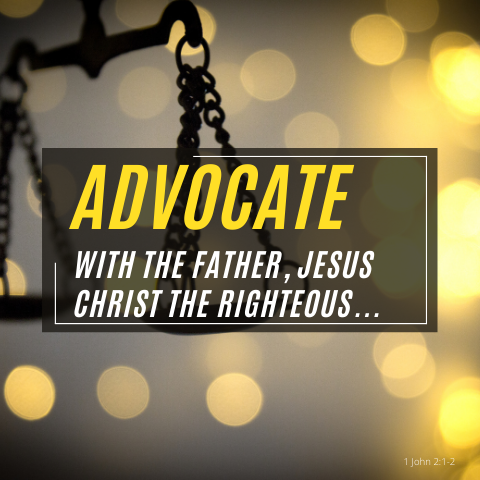 “My little children, these things write I unto you, that ye sin not. And if any man sin, we have an advocate with the Father, Jesus Christ the righteous: And he is the propitiation for our sins: and not for ours only, but also for the sins of the whole world.” 1 John 2:1,2

The Apostle John wrote much about the deep love of God and the sweetness of God’s salvation. But, he also spoke clearly to the effect of God’s love upon believers: “I write to you, so that you do not sin!” Apparently, there were some in John’s audience who twisted and perverted God’s grace into a license to sin. John would have none of it. God calls us to live righteously before Him. John’s letter emphasizes repeatedly that the evidence that one truly knows Christ (has true faith) is a life of obedience. A sincere believer takes this seriously. He or she desires to please the Lord, to follow Christ with joyful obedience and devotion. Yet, those with true faith still sin. The ugly reality that we still possess a sinful, fallen nature manifests itself and can be a source of great discouragement. We can hear a sermon on Sunday that is convicting and inspiring, and leave with genuine resolve to apply the word, only to find ourselves slipping by Tuesday afternoon. Such real-life experience for believers can leave them deflated. Is there any hope?

There is gospel hope. Jesus hope! John lovingly and firmly calls on believers to walk in godliness. But, in the next line, the Holy Spirit gives us the other side of the coin. “And if any man sin…” Ah! God has made provision for our present corruption. That we still sin is not condoned, but it also is not a big shock (1 John 1:8). When believers sin, they must remember that the work of Christ on their behalf is not finished. Yes, His death will never be repeated because it was fully effective and sufficient. But, the benefits of that death continue on. Jesus is the Advocate of His people. An advocate is a defense attorney. He pleads the cause of another before a court of law. John says we have an advocate “with the Father.” That expression denotes the idea of towards, or before the face of God. Consider the scene, Christian. Before the face of the Judge, stands the perfectly righteous Jesus Christ advocating on your behalf!

You might ask, “How does Jesus advocate for us? Does He lie and say we didn’t really sin? Does He try to tell the Father that most of the time we behave ourselves and are better than most folks?” Jesus would never plead in that way asking God to compromise His righteous standard. Rather, Jesus pleads Himself! The text says He is the propitiation for our sins. In fact, He is the propitiation for sinners all over the world. That means His sacrifice rendered full and sure satisfaction to the perfect justice of God for all our sins. Jesus paid all the debts for all those the Father gave Him. There is no remaining payment for sinners to offer God. Our advocate represents us by appealing to His own perfect sacrifice. Furthermore, it is not as if the Father is hesitant to forgive us. He is the one who sent Jesus to save us. He raised Jesus from the grave being fully satisfied with His sin-sacrifice. The Father loves us and delights to forgive. Yes, believer, there is hope when you sin.

Instead of making excuses for sin, look to Jesus. Rather than responding to a guilty conscience with even more sin, look to Jesus. Instead of drowning in discouragement, confess your sin to God, make every effort to repent and remember you have an advocate who is right there with the Father. A distorted view of things makes our sin (as heinous as it is) greater than Jesus’ sacrifice. A right view sees sin for its great evil, but sees the blessed sufficiency of Jesus as all that we need.